Since 2015, Trillium CNG has partnered with Saddle Creek Logistics to support Wreaths Across America, a charitable organization whose mission is Remember, Honor, Teach. That mission is carried out by coordinating wreath-laying ceremonies at Arlington National Cemetery, as well as at veterans' cemeteries and other locations in all 50 states and abroad.

This year, Trillium helped Saddle Creek exceed their goal of placing 23,000 wreaths at the Florida National Cemetery in Bushnell, Florida.

"Saddle Creek's commitment to Wreaths Across America has grown continuously in the last 12 years," said Saddle Creek's Senor Transportation Manager Tom Nepute. "We are honored to have Trillium CNG as a partner in this cause."

One Trillium employee is taking our contribution a step further. Aaron Adams, member of Trillium's engineering group, volunteered to lay wreaths at a Houston-area cemetery as part of National Wreaths Across America Day, which is Dec. 16.

Adams' heart for Wreaths Across America stems from his time in the service.

Sergeant Adams served in the CLR-15 unit of the United States Marines Corps from 2009-2017. During his years of active duty, Adams was deployed to Afghanistan, followed by four additional years in the U.S. Marine Corps Forces Reserve.

When asked why Adams planned to volunteer with Wreaths Across America, his response was simple.

"This is my way of honoring sacrifices that have been made for the good of our country," Adams said. "I'm reminded of a quote I heard at a memorial service, 'Sacrifice is meaningless without remembrance.' It's for my fellow unit members who were deployed again to Afghanistan and killed in action." 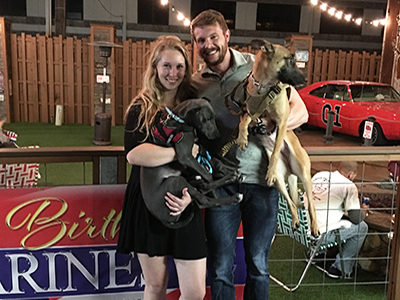 Adams smiles with his girlfriend and service dog.

Trillium's partnership with Saddle Creek and Adams opportunity to volunteer with Wreaths Across America reminds him how this nonprofit bonds people together.

"I see this as a great opportunity for veterans, military families and civilians to all connect with one another, remember and pay respects," Adams said. "That connection is vital to all of us."

During National Wreaths Across America Day, Adams will be accompanied by his mother, also a Marine, his girlfriend and his service dog Juliette.